Flashback Friday: The Origins of the World Golf Championships

How the PGA Tour seized control of international tournament golf

This week’s tournament in Memphis, Tennessee, is part of the World Golf Championships series, but it looks, swims, and quacks like a normal PGA Tour event. The venue, TPC Southwind, is owned by the PGA Tour, and the primary sponsor is FedEx, the Tour’s most prized corporate partner.

A perceptive viewer will pick up on a few points of difference. First, there’s no cut. Second, the field is small—only 63 players, including a few names that U.S. and European audiences may not recognize: Philip Eriksson, Mikumu Horikawa, Kodai Ichihara, Aaron Rai, and Poom Saksansin.

Casual fans are unlikely to catch those nuances, however. Like any tour event, the WGC-FedEx St. Jude Invitational has the potential to be either exciting or dull, depending on what happens in the competition itself. But the fact that it’s a World Golf Championship won’t really matter to the majority of fans, and that’s too bad.

When they began 20 years ago, WGCs promised to bring a different flavor to the top level of professional golf. They attempted to draw everyone’s attention outward, to great players from around the world, to golf courses in far-flung places. Two of the tournaments—the WGC Match Play and the WGC World Cup—adopted fun, unusual formats. The intentions were good.

But the execution wasn’t. In 2003, none of the WGC events ventured outside of the United States. By 2007, the World Cup was no longer in the series. Today, three of the four tournaments have permanent venues in North America. With the exception of the Match Play, the WGCs are 72-hole stroke-play contests that more or less blend in with the PGA Tour’s regular offerings.

This is unfortunate. But it may have also been inevitable, given how the World Golf Championships came to be.

“An ugly idea, both crass and alien to golf”

In November 1994, Greg Norman went public with his pitch for a World Golf Tour, which would consist of eight events with $3 million purses for the world’s top 30 players. He said the Fox network was on board to the tune of $112 million. At the time, Norman was perhaps the best and most marketable golfer in the world. If anyone could pull this off, it would be him.

But he didn’t come close. Most everyone saw the proposal as a threat to the PGA Tour, and the knives came out. For an idea of how heated the rhetoric grew, consider these excerpts from a 1994 Washington Post editorial by Thomas Boswell:

Suffice it to say that the tide turned against the World Tour. “If a new tour becomes a reality in 1995 or thereafter,” PGA Tour commissioner Tim Finchem said, “our members will have to decide whether they want to continue to play on the PGA Tour or play on a new tour.” Specifically, Finchem threatened to use “conflicting events” rules to punish players who participated in the World Tour. Norman could have challenged these rules in court, but he knew that the PGA Tour had the resources for a long, expensive legal fight. He backed off. 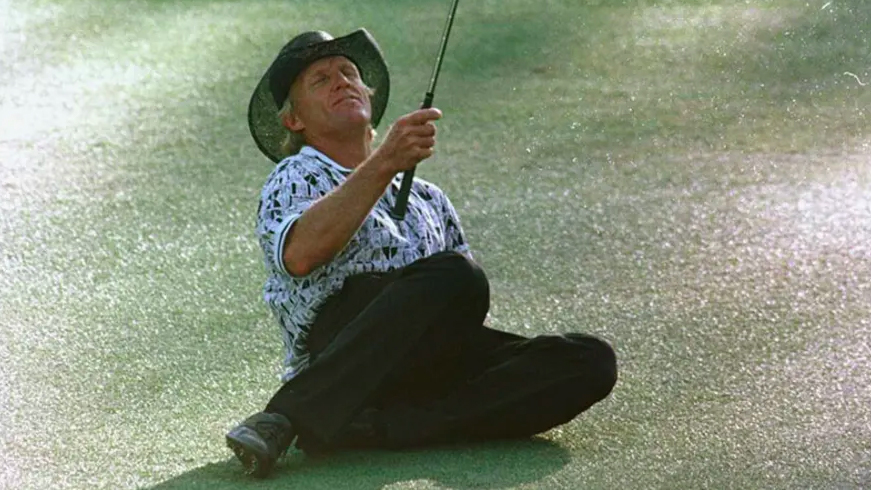 Greg Norman at the 1996 Masters

“I’ve had it up to here with Tim Finchem”

In the run-up to the 1996 Presidents Cup, Finchem made his next move. He joined with the European, Australasian, Japanese, and South African circuits to form the International Federation of PGA Tours. Soon the federation announced plans for a series of international tournaments called the World Golf Championships.

Greg Norman was furious. According to Tim Rosaforte’s juicy report for Sports Illustrated, Shark hunted down Finchem in the lobby of the hotel where the Presidents Cup teams were staying. “I told him I was irritated with him,” Norman said the next day. “I’ve had it up to here with Tim Finchem. It’s the end of the rope for me. He hung me out to dry.”

Norman claimed that Finchem had promised to keep him in the loop about any plans for a World Tour-like series, but the WGC announcement had taken him by surprise: “I asked [Finchem], ‘How long have you known about this?’ He said, ‘About a month.’ I said, ‘F— you.’”

While Finchem didn’t enjoy beefing with the No. 1 golfer in the world, he maintained that the WGC initiative wasn’t simply a ripoff of Norman’s proposal. “We’re not talking about a group of top players playing each other,” Finchem said. “However, this clearly will create a situation where players who reach a certain level will play against each other.” To paraphrase Monica Geller, the ideas were as different as night and… later that night. A year later, a (slightly) less peeved Greg Norman summed up the PGA Tour’s power play: “I think there is only one word for it, and that word is control. Now control is there, in their mind, and let them have it, let them go with it, let them see what they can do.”

By torpedoing the World Tour and founding the International Federation of PGA Tours in that crucial mid-1990s period, Tim Finchem did far more than launch the World Golf Championships. He made it clear that the PGA Tour would throw its weight around at the global level. If an upstart tour tried to siphon off the world’s best male players, it had better bring the money to withstand legal hellfire. From this point forward, any changes to the international order of professional tournament golf would need to suit the PGA Tour’s interests.

So it’s not surprising that the WGCs have come to look more and more like normal PGA Tour events. The seat of power on the International Federation belongs to Finchem’s successor, Jay Monahan. That’s why, when the WGCs face questions about venues or formats or sponsors, the answers tend to be spoken in an American accent.

Flashback Friday is The Fried Egg’s exploration of the forgotten details of golf history. For an audio rendition of this week’s installment, listen to the Shotgun Start podcast.